“A Sailor’s Life for Me”—Zwaanendael Museum’s 7th Annual Maritime Celebration
Adults and children alike will have an opportunity to experience seafaring lives of adventure, romance, excitement and hardships, and to honor mariners who made the ultimate sacrifice, during the Zwaanendael Museum’s seventh annual maritime celebration, “A Sailor’s Life for Me,” that will take place at a variety of downtown Lewes, Del. locations from Friday to Sunday, May 25 to 27, 2018

Hull tour of His Majesty’s Sloop DeBraak, Noon
Participants will meet at the Zwaanendael Museum where they will board a van that will transport them to an offsite conservation facility for a guided tour of the surviving hull section of the DeBraak which sank off the Delaware coast on May 25, 1798. Admission is free, but due to limited seating, reservations are required by calling 302-645-1148 no later than Friday, May 18, 2018. Tour limited to the first 12 people with reservations. Museum open 1:30–4:30 p.m. 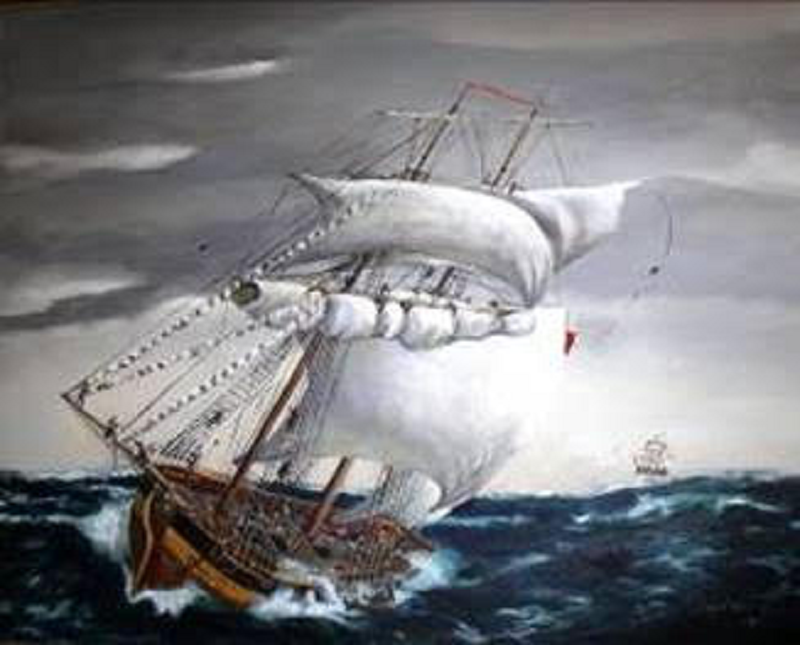 Artistic rendition of the capsizing of the DeBraak by Peggy Kane, 1990.
¨      Wreath-laying ceremony honoring crew members of the DeBraak, apx. 3 p.m.
Accompanied by a bagpiper, the ceremony will take place at the DeBraak Memorial located on the museum grounds. The site is believed to contain the remains of several crew members who lost their lives in the sinking of the DeBraak.
Canal Front Park, 211 Front St., Lewes
¨      Living-history encampment, 9 a.m.–1 p.m.
Historical re-enactors will portray sailors and mariners from throughout history. Activities include displays and demonstrations
Saint Peter's Episcopal Church cemetery, 211 Mulberry St., Lewes
¨      Wreath-laying ceremony at the tomb of James Drew, captain of the DeBraak, 2:30 p.m.
Accompanied by a bagpiper, participants will lay a wreath on Capt. Drew’s grave, followed by a walk to the Zwaanendael Museum for a wreath-laying ceremony honoring other crew members of the DeBraak
Lightship Overfalls, 219 Pilottown Road, Lewes (next to Canal Front Park)
¨      Tours and sound-pipe demonstrations, 10 a.m.–4 p.m.
Tour this National Historic Landmark that was the last lightship built by the United States Lighthouse Service and hear demonstrations on the use of sound pipes which were used by the Overfalls to produce distinct and powerfully audible warnings during the presence of thick fog or mist. Last tour at 3:30 p.m. Admission $5 for adults and children over 14 years of age
The Zwaanendael Museum was built in 1931 to commemorate the 300th anniversary of the state's first European colony, Swanendael, established by the Dutch along Hoorn Kill (present-day Lewes-Rehoboth Canal) in 1631. Designed by E. William Martin (architect of Legislative Hall and the Hall of Records in Dover), the museum is modeled after the town hall in Hoorn, the Netherlands, and features a stepped facade gable with carved stonework and decorated shutters. The museum’s exhibits and presentations provide a showcase for Lewes-area maritime, military and social history. Call 302-645-1148 or visit www.History.Delaware.gov for more information.