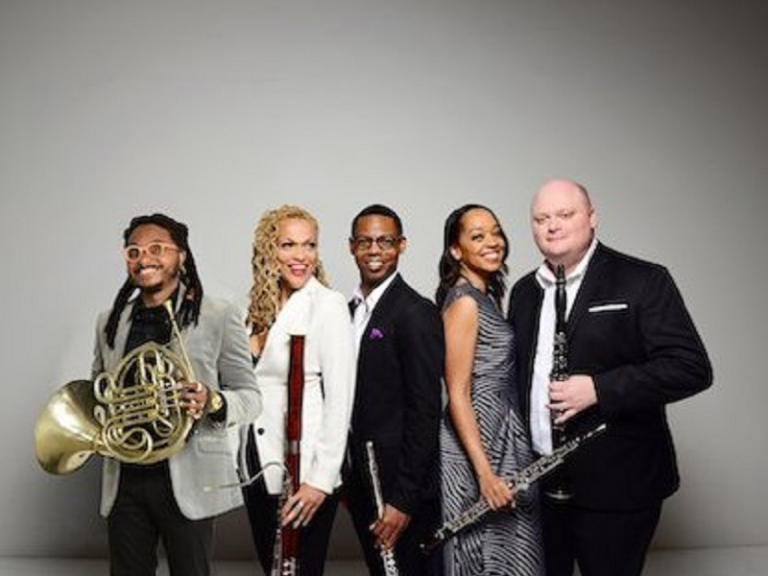 Celebrating over 20 years of music making, the twice Grammy nominated Imani Winds has led both a revolution and the evolution of the wind quintet through their dynamic playing, adventurous programming, imaginative collaborations and outreach endeavors that have inspired audiences of all ages and backgrounds.

The ensemble’s playlist embraces traditional chamber music repertoire, and as a 21st century group, Imani Winds is devoutly committed to expanding the wind quintet repertoire by commissioning music from new voices that reflect historical events and the times in which we currently live.

Present and future season performances include a Jessie Montgomery composition inspired by her great-grandfather’s migration from the American south to the north; and, socially conscious music by Andy Akiho designed to be performed both on the concert stage and in front of immigrant detention centers throughout the country.

Imani Winds’ travels through the jazz world are highlighted by their association with saxophonist and composer Wayne Shorter, woodwind artist and composer Paquito D’Rivera and pianist and composer Jason Moran. Their ambitious project, “Josephine Baker: A Life of Le Jazz Hot!” featured chanteuse René Marie in performances that brought the house down in New York, Pittsburgh, San Francisco, Los Angeles and St. Louis.

Imani Winds’ commitment to education runs deep. The group participates in residencies throughout the U.S., giving performances and master classes to thousands of students each year. Academic and institutional residencies include the Chamber Music Society of Lincoln Center, Duke University, University of Chicago, Curtis Institute of Music, University of Michigan, Da Camera of Houston and numerous others across the country.

The ensemble launched its annual Imani Winds Chamber Music Festival in 2010, bringing together young instrumentalists and composers from across North America and abroad for exploration and performance of the standard repertoire and newly composed chamber music. Festival participants also take part in workshops devoted to entrepreneurial and outreach opportunities, with the goal of creating the complete musician and global citizen.

Imani Winds has six albums on Koch International Classics and E1 Music, including their Grammy Award nominated recording, The Classical Underground. They have also recorded for Naxos and Blue Note and released Stravinsky’s Rite of Spring on Warner Classics. Their most recent recording, Bruits, has been receiving critical acclaim since its release on the Bright Shiny Things label in February 2021.

Imani Winds is regularly featured on all media platforms including NPR, American Public Media, the BBC, SiriusXM, The New York Times and the Wall Street Journal.

In 2016, Imani Winds received their greatest accolade in their two decades of music making: a permanent presence in the classical music section of the Smithsonian’s National Museum of African American History and Culture in Washington D.C.