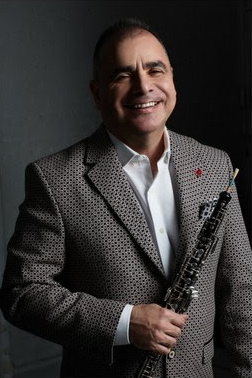 Considered by many to be the most difficult of all the musical instruments, the oboe is often called the “ill wind that no one blows good.” Oboist Thomas Gallant is one of the world’s few virtuoso solo and chamber music performers on this instrument and he has been praised by The New Yorker magazine as “a player who unites technical mastery with intentness, charm and wit.”

Thomas Gallant is a First Prize Winner of the Concert Artists Guild International New York Competition and one of very musicians ever to win this competition as an oboe soloist. His performances have taken him to Avery Fisher Hall, Weill Recital Hall and the Frick Collection in New York City, to Washington, DC, Los Angeles, Chicago, Philadelphia, to the Spoleto Festival in Italy, and to the Mostly Mozart Festival at Lincoln Center. He has appeared as guest soloist with the Kronos Quartet at the Ravinia Festival and has collaborated with flutist Jean-Pierre Rampal, with Cuarteto Casals, the Colorado, Calder and Lark Quartets, Cuarteto Latinoamericano and with the Adaskin String Trio. Recent and upcoming performances include a concert of solo and chamber music works for the oboe at the Library of Congress in Washington, DC, and tours across the United States as soloist with Camerata Bariloche from Argentina and the String Orchestra of New York City performing concerti by J. S. Bach and Vaughan-Williams. 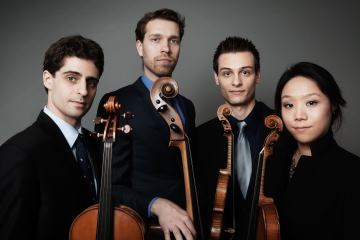 Tesla Quartet
Praised for their “superb capacity to find the inner heart of everything they play, regardless of era, style or technical demand” (The International Review of Music), the Tesla Quartet brings refinement and prowess to both new and established repertoire. Dubbed “technically superb” by The Strad, the Tesla Quartet recently took Second Prize as well as the Haydn Prize and Canadian Commission Prize at the 12th Banff International String Quartet Competition. The quartet has also garnered top prizes at numerous other international competitions, including the Gold Medal at the 2012 Fischoff National Chamber Music Competition, Third Prize and the Best Interpretation of the Commissioned Work at the 6th International Joseph Haydn Chamber Music Competition in Vienna, and Third Prize at the 2012 London International String Quartet Competition. The London Evening Standard called their rendition of the Debussy Quartet “a subtly coloured performance that balanced confidently between intimacy and extraversion.”