Dogfish Head has proudly focused on brewing beers with culinary ingredients outside the Reinheitsgebot since the day it opened as one of the smallest American craft breweries more than 27 years ago. Dogfish Head has grown into a top-20 craft brewery and won numerous awards throughout the years, including Wine Enthusiast’s 2015 Brewery of the Year and the James Beard Foundation Award for 2017 Outstanding Wine, Spirits, or Beer Professional. A Delaware-based brand with Dogfish Head Brewings & Eats®, an off-centered brewpub and distillery, Chesapeake & Maine®, Dogfish Head’s seafood and cocktail spot, Dogfish Inn®, a beer-themed inn on the harbor, and Dogfish Head Craft Brewery®, a production brewery and distillery featuring the Tasting Room & Kitchen and Dogfish Head Distilling Co. ®, Dogfish Head is a supporter of the Independent Craft Brewing Seal, the definitive icon for American craft breweries to identify themselves to be independently-owned and carry the torch of transparency, brewing innovation and the freedom of choice originally forged by brewing community pioneers. Dogfish Head currently sells beer in all 50 states and Washington D.C. For more, visit www.dogfish.com, Facebook: @dogfishheadbeer, Twitter: @dogfishbeer, and Instagram: @dogfishhead.

“Our team here at Dogfish is stoked to host Analog-A-Go-Go in-person again for the first time since 2019,” said Dogfish Head Founder & Brewer, Sam Calagione. “This is one of my favorite events of the year because it combines three of my favorite things: beer, music and artful collaboration. And as always, we have a few new off-centered innovations in store for this year’s event that I can’t wait for folks to see.”

To complement the festival’s annual, fan-favorite offerings, Dogfish head will launch two new limited-time collaborations, the Numero Duo Box and Grain to Glass Whiskey. Crafted in partnership with Numero Group and Grain Surfboards, a local hand-built surfboard company, both will be available for purchase exclusively at Analog-A-Go-Go, while supplies last.

Dogfish Head and Numero Group are giving guests the opportunity to take the Analog-A-Go-Go experience home with the ultimate beer and music crossover. Together, Numero Group and the Dogfish Head brewing team dreamed up a double-sided vinyl record that includes tunes from a selection of incredible Numero Group bands, including Say She She and Le Ren, who are slated to take the stage at Dogfish Head Brewings & Eats throughout the jam-packed Analog weekend. Each side of the vinyl is artfully designed to pair with a limited-edition Dogfish Head beer, Something Cosmic and Something Atomic. The Numero Duo Box set includes the vinyl record and a 4pk of each exclusive beer, all of which is packaged in a special collaborative record crate.

The best way to rock out to Side One of the record is with a can of Something Cosmic (8.0% ABV), a Dunkeldoppelbocksteinbier brewed with hot rocks, carob, avocado honey and brown rice at Dogfish Head’s Milton brewery. Then, flip that vinyl and grab a can of Something Atomic (12.0% ABV), a pastry stout inspired by the Hummingbird Cake, featuring banana, pineapple and pecans from the brewery’s Rehoboth brewpub. The beer’s sweet flavors are sure to pair perfectly with Side Two’s selection of soul tunes.

For spirits lovers, Dogfish Head and Grain Surfboards have joined forces to create a one-of-a-kind drinking experience. Specializing in hand-built, environmentally friendly, wooden surfboards, Grain Surfboards is putting their leftover cedar to use in a different way during this collaboration. Introducing Grain to Glass Whiskey (46% ABV), a special blend of two different Dogfish Head whiskey styles, one aged for two years in White American Oak barrels and the other rested on the cedar that is used to make Grain Surfboards. Grain to Glass Whiskey will be available at Analog-A-Go-Go, for on-site consumption, and for purchase to-go in 375mL bottles at Dogfish Head’s Tasting Room & Kitchen. Those who can’t get enough of this collaboration can stop by Grain’s booth at Analog-A-Go-Go to enter to win a one-of-a-kind Dogfish Head and Grain Surfboards branded stand up paddleboard. 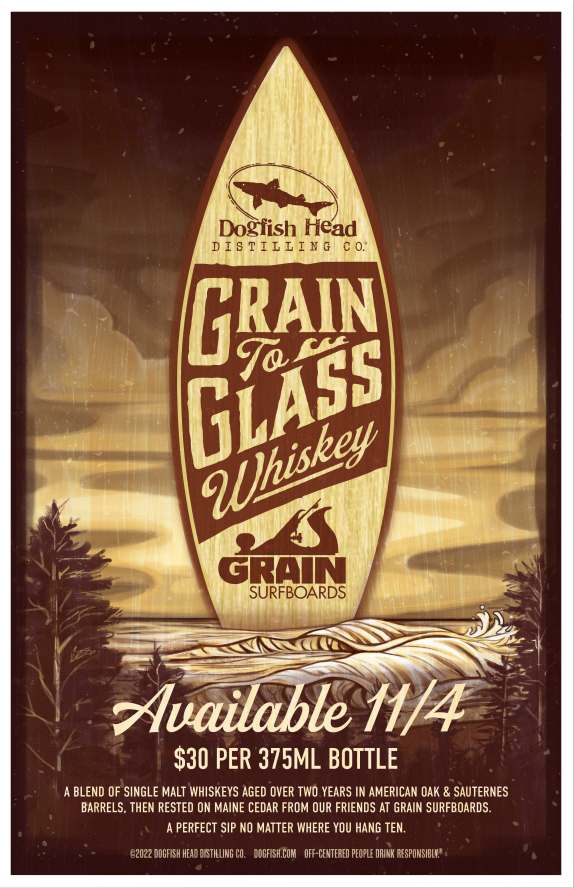 For details on Analog-A-Go-Go or to purchase a ticket, please visit www.dogfish.com/analog-a-go-go. For more on Numero Group and Grain Surfboards, visit www.numerogroup.com and www.grainsurfboards.com, respectively.