THE FIGHT Opening at the Cinema Art Theater 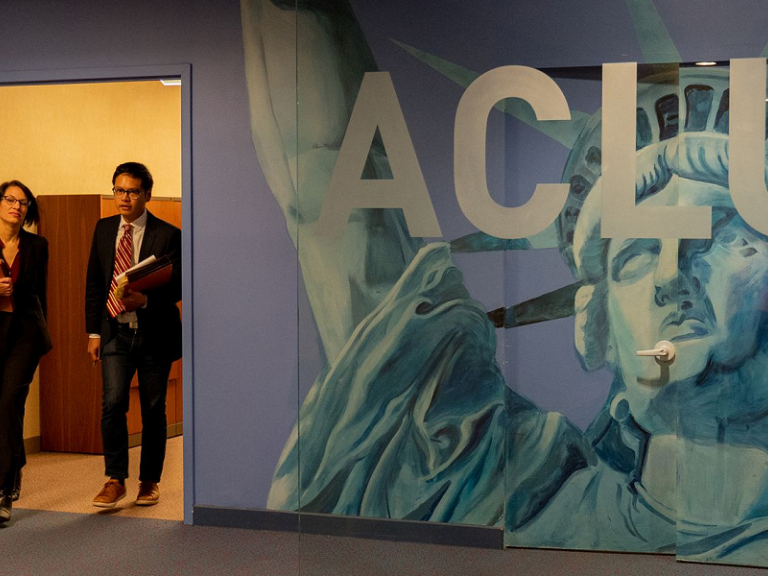 THE FIGHT
Opening at the Cinema Art Theater

Only days after the 2017 inauguration of Donald Trump, furious Americans gathered at airports across the country in protest of the Muslim ban. But it was the efforts of the American Civil Liberties Union waging the fight in federal court that turned the tide, staying Trump’s executive order on grounds of unconstitutionality. The ACLU has never granted access to its offices, even as its battles have become more timely and momentous than ever. This access has finally been granted to the filmmaking team of Eli B. Despres, Josh Kriegman and Elyse Steinberg, makers of 2016’s award-winning “Weiner.” You will be inspired by this story of front-line warriors in the battle for the American soul. [2020, US, 96 min, Rated: PG-13].
CLICK HERE TO ORDER FILM
Immediately following the film, there will be a pre-recorded discussion between Kerry Washington and the four ACLU lawyers featured in the film (Brigitte Amiri, Lee Gelernt, Dale Ho, and Chase Strangio). This conversation is exclusive to virtual cinema and in-theater engagements. Additionally, patrons will have free access to a live Q&A on Sun., Aug 2 with the filmmakers and lawyers, moderated by Ann Hornaday of the “Washington Post.” This also will be archived and available beyond Aug 2.

Katie Walsh of “Tribune News Services” says, “Although ‘The Fight’ is swift and jam-packed with ups, downs, wins, losses, injunctions, stays, hearings and Trump speeches, the film is remarkably detailed and careful.” Pat Brown of “Slant Magazine” writes, “The film justly draws attention to the perpetual work that must go into preserving democratic institutions.”
To help keep the Cinema Art Theater’s future bright, visit rehobothfilm.com for streaming links to watch one or several available films at your home. The distributor sets the fee but if more than one person is watching, it is a bargain. Thank you for your support.

The mission of the RBFS is promoting cinematic arts and providing education, cultural enrichment, and opportunities for engagement for our diverse communities and audiences. The Film Society sponsors ongoing screenings, special events, and the Rehoboth Beach Independent Film Festival. Having met all the requirements for best practices in nonprofit management, the Rehoboth Beach Film Society is accredited by the Standards for Excellence Institute®. The Film Society is funded, in part, by a grant from the Delaware Division of the Arts, a state agency, in partnership with the National Endowment for the Arts. The Division promotes Delaware arts events on DelawareScene.com. For more information on this series, other events, or to become a member, visit the Rehoboth Beach Film Society website at www.rehobothfilm.com or call 302-645-9095.