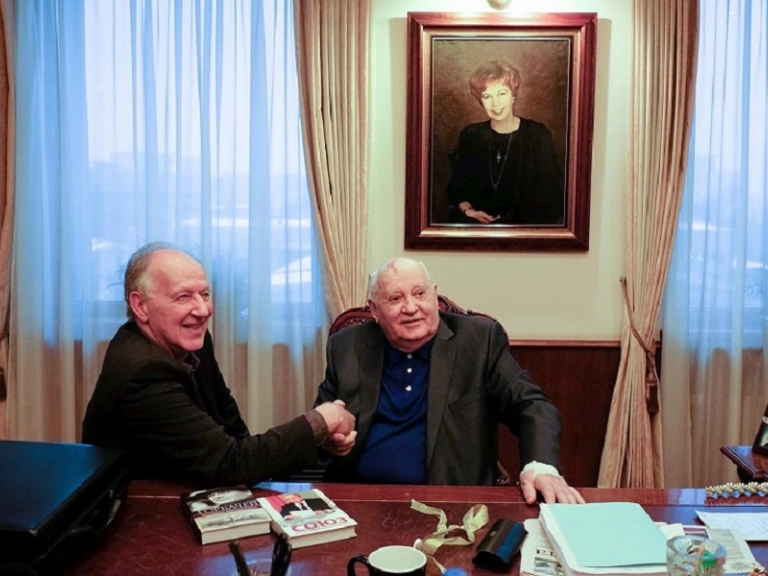 Starting on May 24, the Rehoboth Beach Film Society’s Cinema Art Theater will present the legendary filmmaker Werner Herzog’s new documentary (co-directed with Andreì Singer) “Meeting Gorbachev,” about the architect of the end of the Cold War, Mikhail Gorbachev. Filled with unforgettable archival materials and based on three long interviews, the film provides incredible access to arguably the world's greatest living politician.

Now 87 and battling illness, the visionary Mikhail Gorbachev, former General Secretary of the U.S.S.R, has mellowed and slowed down. Still, gently but resolutely, he is pushing towards his goals. Herzog, as on-screen interviewer, does not disguise his affection, celebrating Gorbachev's three remarkable accomplishments: negotiations with the U.S. to reduce nuclear weapons; cessation of Soviet control of Eastern Europe and the reunification of Germany; and the dissolution of the Soviet Union and Eastern Bloc. All of this in six years! One German diplomat sums up Gorbachev's approach: "The process went so quickly that... opponents were overcome by the reality of the situation." Herzog and Singer remind us of the drastic and unforeseeable way the world changes. [2019, UK/Germany/US, in Russian, German and Polish with English subtitles 90 minutes, Rated: Not Rated].

William Bibbiani of “TheWrap.com” makes a stirring case as to why you should go see the film: “So deeply fascinating that there's nothing else the filmmakers could have done to spice it up. Herzog and Gorbachev could have joined forces to halt an alien invasion and invent time travel, and it still wouldn't have packed the same wallop.” Anthony Lane of “The New Yorker” calls the film, “a stirring enterprise, especially when it peers back, beyond the bright public record of Gorbachev's heyday, into the mist of what feels like a distant past.”

The mission of the RBFS is promoting cinematic arts and providing education, cultural enrichment, and opportunities for engagement for our diverse communities and audiences. The Film Society sponsors ongoing screenings, special events, and the Rehoboth Beach Independent Film Festival (October 31 – November 10, 2019). Having met all the requirements for best practices in nonprofit management, the Rehoboth Beach Film Society is accredited by the Standards for Excellence Institute®. The Film Society is funded, in part, by a grant from the Delaware Division of the Arts, a state agency, in partnership with the National Endowment for the Arts. The Division promotes Delaware arts events on www.DelawareScene.com. For more information on this series, other events, or to become a member, visit the Rehoboth Beach Film Society website at www.rehobothfilm.com or call 302-645-9095.