Opening October 21, the Rehoboth Beach Film Society’s Cinema Art Theater presents Piggy, a though-provoking and shocking international horror drama with a twist that dissects the webs of shame and secrecy that is brought on by bullying.

With the summer sun beating down on her rural Spanish town, Sara hides away in her parent’s butcher shop. A teenager whose excess weight makes her the target of incessant bullying, she flees a clique of capricious girls who torment her at the town pool, only to stumble upon them being brutally kidnapped by a stranger, who drives off with them in his van. When police begin asking questions, Sara keeps quit and begins her revenge on those who label her “Cerdita” (little pig). Intrigued by the stranger – an interest that’s mutual – she’s torn between revealing the truth and protecting the man who saved her. Piggy is an official selection at the 2022 Sundance Film Festival. [2022, Spain, 906 min, Rating: NR, in Spanish with English subtitles]

Noel Murray of the Los Angeles Times pens, “A masterful mix of dark comedy, social commentary and raw suspense.” K. Austin Collins of Rolling Stone writes, “
Desperation can make anyone kind. That’s one takeaway from Piggy. Another is that Galán is an actor worth keeping an eye on, a very canny choice for a movie so poised to walk tonal tightropes, drifting between misery and humor, shame and shamelessness.” 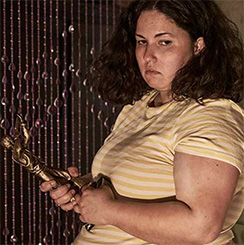