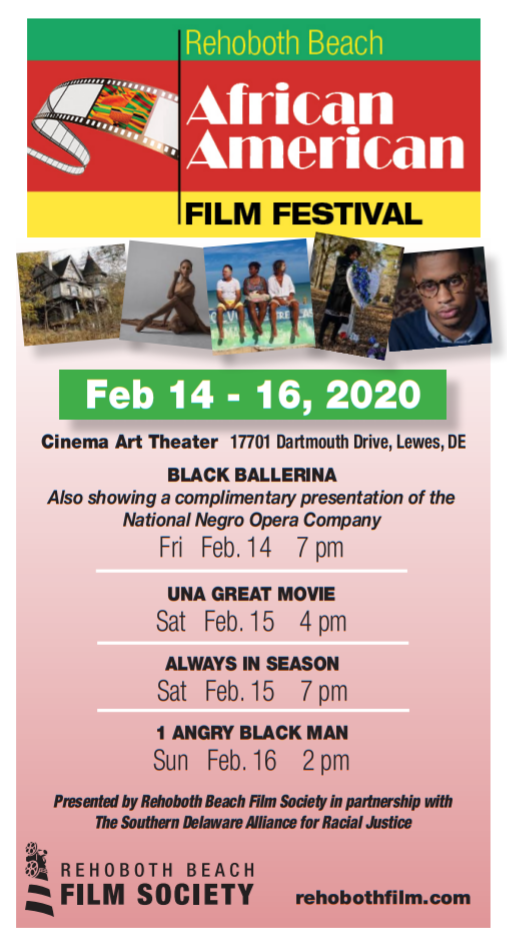 The third annual Rehoboth Beach African-American Film Festival (February 14-16) will celebrate the trailblazing work of black artists in shaping American culture, while taking an unflinching look at the indignities and roadblocks designed to silence their voices. It will expose the violence still perpetuated against black communities and show a hopeful way forward through justice and reconciliation. From the ivied lecture halls of academia--where the still-powerful voices of James Baldwin and Zora Neale Hurston ring out--to the sunny shores of Mexico; from the small town South to the boards of ballet stages across the country; viewers will have the rare opportunity to experience worlds and viewpoints not often shown on screen. Recognizing that these films are thought-provoking, after each screening an audience discussion will be led by members of the festival’s selection committee. We hope that you will stay and share your thoughts.

This short film showcases Madame Dawson's Opera Company, the now-dilapidated home's glorious history and the efforts to preserve it. [2009, US, 13 minutes, Not Rated].

dancers of color continue to face formidable challenges breaking into the overwhelmingly white world of ballet. Moving back and forth in time, this lyrical, character-driven film presents a fresh discussion about race, inclusion, and opportunity across all sectors of American society. [2016, US, 56 minutes, Rated G].

As a screenwriter takes notes from Hollywood executives, her beautiful diverse movie about a black American woman traveling to Mexico slowly becomes a romantic comedy with an all-white cast. A quirky cerebral look into commercialism and greed, juxtaposed with a heartwarming movie that challenges stereotypes.

“Una Great Movie” uses comedy to reflect on relevant contemporary issues. It is fun and humorous with a unique storytelling style that incorporates a professional cast mixed with local Mexican non-actors. The movie introduces refreshing new perspectives against common stereotypes, portraying a universal humanity rather than categories of difference. [2018, US, 102 minutes, Not Rated].

In the small town of Bladenboro, NC, seventeen-year-old Lennon Lacy was found hanging from a swing set on August 29, 2014. Despite inconsistencies in the evidence, local officials quickly ruled Lennon’s death a suicide, but his mother, Claudia, believes Lennon was lynched.

“Always In Season” follows Claudia as she moves from paralyzing grief to leading the fight for justice for her son. It asks the question: what will it take for Americans to build a national movement for racial justice and reconciliation? Brian Tallerico of “RogerEbert.com” praises the documentary as, “A nuanced, layered reminder of how far we still have to go to correct the injustices of this country's past and present. [2019, US, 89 minutes, Not Rated].

Mike Anderson is a senior at the quintessential New England liberal arts school, Frost College, and Mike is eight weeks away from graduation. On this particular day he has his African-American literature class with his favorite professor. But today, Mike is feeling sadness. He’s feeling isolated. He’s feeling angry.

Jamie Broadnax of “BlackGirlNerds.com” calls the film “profound in its exploratory approach to observational perspectives within the fabric of gender dynamics, racism, class, as well as an empirical study of Black intellectuals.” [2018, US, 92 minutes, Rated R].