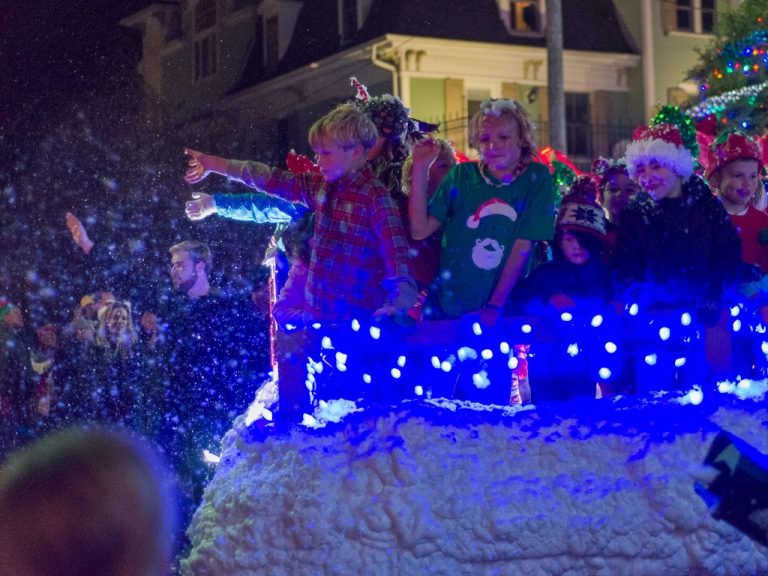 86th ANNUAL LEWES CHRISTMAS PARADE
TAKES PLACE ON SATURDAY, DECEMBER 2AT 5 PM
HONORING PARADE LONGTIME PARADE ORGANIZERS
TOM KING & DENNIS FORNEY
PARADE IS DEDICATED IN TOM’S MEMORY
This year’s annual Lewes Christmas parade, presented by the City of Lewes and the Lewes Chamber of Commerce, will honor as Grand Marshals its longtime parade organizers Tom King of King’s Ice Cream Shops and Dennis Forney of the Cape Gazette.  Lewes lost one its brightest lights on Saturday, November 25 when Tom lost his bravely fought, two year battle with cancer. This year marks Tom and Dennis’ 35th anniversary of collaborating to bring the magic of the holiday to the streets of Lewes. In recognition of his contributions to one of Lewes’ cherished community events, this year’s parade is dedicated in Tom’s memory. Both men served consecutively on the chamber’s board as president in the early 1980s and took over responsibility for organizing the parade in 1982 when the number of entries had been dwindling.  Joining Dennis in the Grand Marshal’s vehicle on the evening of the parade will be Chris King, Tom’s wife and his bother Ben King. Both Chris and Ben have been involved in the planning and implementation of the parade for as long as Tom was chairing it.
The parade takes place on December 2 at 5 p.m. (Rain/Snow Date: Saturday, December 9 at the same time). For many years the parade has had a designated theme but has always promoted itself as an old fashioned parade. Recognizing that as the parade entries have grown considerably since Tom and Dennis took over organizing it, many of those entries also enter other towns’ parades with different themes.  The number of entries that actually used the theme was very small. This year and in future years, the parade’s theme will be “Celebrating an Old Fashioned Christmas in Lewes.”
Prizes will be awarded in the following categories: Marching Group, Band, Clown, Equestrian, Decorated Classic Car (vintage 1967 or older), Decorated Vehicle (after 1967 or more recent), Fire Company, Commercial Float, Community Organization Float and Youth Organization Float.  ALL entries need to be decorated. Entrants will be notified in a mailing on November 22 with their entry number and their parade lineup time.  The parade line up takes place from 3:30-4:15 p.m. and the parade begins on Savannah Road at Sussex Drive and will end on Second Street.  Entrants for Saturday’s parade are asked to commit to the Rain/Snow date on the following Saturday, if it is necessary.
After the parade, the tradition has been to officially illuminate the Christmas tree in Zwaanendael Park followed by candlelight caroling in the park, led by Christy Taylor with sound by Bill Larsen.  This year, a new tradition is being established by the City’s Parks and Recreation committee. They have made arrangements to have a fresh-cut tree moved into Zwaanendael Park between the museum and the Fisher-Martin House. The 30 foot tree is a Norway spruce donated by Liz Hudson.  The tree lighting ceremony will commence shortly after the last parade entry passes by the judges’ reviewing stand in Zwaanendael Park.
The Christmas Parade is the culmination of a number of special events and activities associated with the celebration of the Christmas Weekend in Historic Lewes. The festivities kick off on Thursday, November 30, with the Lewes Merchants’ 31st annual Hospitality Night from 5-8 p.m. in the historic commercial district surrounding Second Street, including the Zwaanendael Museum with extended hours.  Second Street will be closed to vehicular traffic from 4 - 8 p.m. on Thursday night. Santa will make a brief visit to his Lewes house in front of Citizens Bank that evening in advance of his arrival at the Lewes Christmas Parade on Saturday night. Each child who visits Santa that night will receive a special gift- The Night Before Christmas, an original reproduction of the 1896 book - compliments of The Cottage, a vintage gift boutique, located on Second Street across from Citizens Bank. On Friday, December 1, the Children’s Beach House (CBH) hosts a Winter White Holiday Celebration benefit from 6:30 - 9:30 p.m. The benefit is open to the public and tickets can be purchased by calling 302-645-9184 or on line at CBHINC.org.  On Saturday, CBH will host an Art Exhibit & Sale in their facility at 1800 Bay Avenue from 10 a.m. to 4 p.m. The Lewes Historical Society’s 44th Annual Christmas Tour of Lewes takes place on Saturday, December 2 from 10 a.m. to 4 p.m.  Also that day, Lewes in Bloom is hosting their 4th annual Christmas Market at St. Peter’s Church yard from 9 a.m. - 3 p.m., selling live Christmas wreaths, bundled fresh greens, floral arrangements and Lewes in Bloom merchandise. Another event Saturday at St. Peter’s Church from 11 a.m-2 p.m. is the ECW Soup Luncheon in the Parish Hall, in conjunction with the Christmas Tour of Lewes.  Tour goers are also invited to visit the Zwaanendael Museum to see their holiday decorations and current exhibits. There are numerous other activities throughout the Lewes area associated with the holiday weekend celebrations. For a complete listing, visit the chamber’s website:  www.leweschamber.com and click on the calendar tab.  The chamber’s visitor center is open Monday through Friday 10 a.m. – 4 p.m. and will be open from 9 a.m. – 4 p.m. on Saturday, December 2