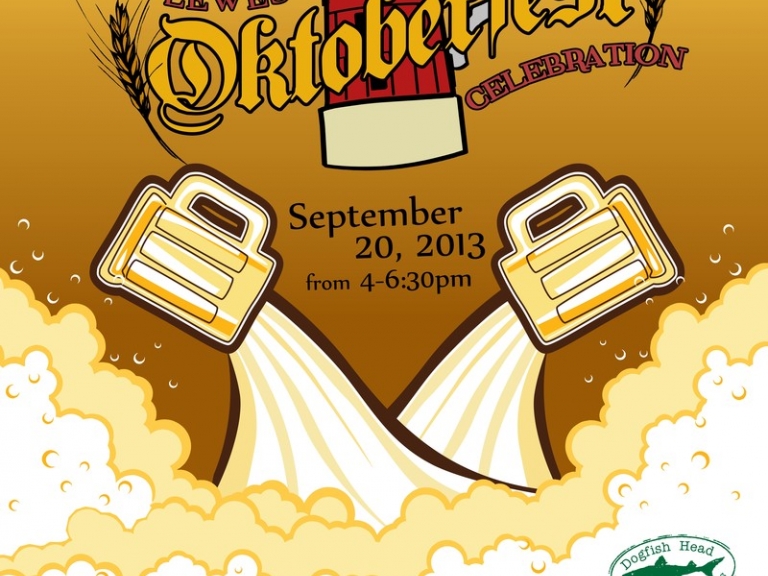 The Lewes Chamber of Commerce’s Historic Lewes Business Committee is sponsoring their second Oktoberfest at their next “Fun Friday” event tomorrow, September 20, 2013.  Market Street, between Front Street and Second Street, will be closed to vehicular traffic from 3–7 p.m. and the event will take place 4-6:30 p.m.
The consumption of beer and German food are integral to an Oktoberfest celebration.  Lewes will create a “beer garden” atmosphere on Market Street MINUS the beer to be in compliance with the City’s ordinances.  Dogfish Head Craft Brewery is synonymous with beer and they are sponsoring the event for the second year.  Dogfish had commemorative glass beer steins fabricated with the Dogfish logo and the event’s custom-designed logo by graphic designer Crystal Heidel. They will be on sale that day at the Chamber’s visitor center in the Fisher-Martin House in Zwaanendael Park, next to the museum and at the festival site beginning at 3 pm. On the day of the Fun Friday Oktoberfest, the steins can be taken into participating restaurants and presented to receive a discount on Dogfish’s pilsner style beer, My Antonia, available at a number of the restaurants in the historic Lewes business district.  German cuisine will be featured in many of the restaurants located in the same area.
The Chamber requested and received permission from the City to close of the portion of Market Street from Front Street to Second Street to accommodate the dancing that will be taking place in front of Mary Vessels Park.  A group of costumed Bavarian-style dancers will be performing and encouraging festival -goers to dance along with them. A 10-piece German Oompah band also will be entertaining those gathered to partake in the festivities.  Everyone is encouraged to wear their lederhosen and dirndls and show off your best dancing skills.

Entertainment Schedule - On Market Street between Front Street and Second Street from 4 - 6:30 pm

The Buttery Restaurant, Jerry’s Seafood and Touch of Italy will be serving food on Market Street from 4 -6:30 pm.

Commemorative beer steins from Dogfish Head will be sold at the Chamber office on Friday from 10 am - 3 pm and on Market Street from 3 pm while supplies last. Limited number of steins available. $ 5 each.

* Discounted beer pricing available where indicated when the commemorative beer steins are presented at time of purchase. Dogfish Head’s My Antonia, pilsner-style beer, is the featured beer but the discounts may apply on other beers at the discretion of the participating restaurants.

German-themed Culinary Specials will be served in participating restaurants.

Gilligan’s Waterfront Bar & Restaurant - 134 W. Market Street - On the Beer garden on their deck, they are offering brats and sauerkraut along with a wide variety of German beers. Bartenders will be dressed in German costumes and there will be a cutout where you put your face and have your picture taken.

*Half Full - 113 Market Street - Offering a variety of Oktoberfest beers including My Antonia and a special autumn veggie pizza with the option of adding beer braised bratwurst.

*Kindle - 111 Bank Street - Offering pork schnitzel with a hunter’s sauce. In addition to the My Antonia, they will offer a special German Oktoberfest lager poured from a special cask that will be on display in the bar.

*Striper Bites Bistro - 107 Savannah Road -Brats and peppers sandwiches on their patio with their Oyster Bar Happy Hour as well as My Antonia beer.

*Touch of Italy Salumeria & Pasticceria II - 101 Second Street - Serving My Antonia in the restaurant with Oktoberfest special fare. On Market Street from 4 - 6:30 pm: Sausage and peppers on a beer roll.

Kids Ketch - 132 Second Street - Featuring German made toys with 20% off all Playmobil playsets for ages 4 & up and the realistic looking Bruder Trucks.