“Vapor lamp was lit in the new lighthouse on the night 15 November 1926. Gas light cut out.”

That simple entry in the private journal of Keeper Robert C. Taylor started the lifesaving duties of the current Harbor of Refuge Lighthouse. . .duties that continue to this day. The new iron lighthouse was built on the caisson foundation of an earlier wooden one which had survived only 18 years at the violent juncture of the Atlantic Ocean and the Delaware Bay.

Harbor of Refuge is the black and white lighthouse visible from Lewes Beach. Now automated, the lighthouse uses solar power and sends its warning beam through a plastic optic instead of the original Fresnel lens. The lighthouse sits on the south end of the outer breakwater, an imposing one-and-a-half mile long wall built of more than a million tons of rock.

Completed in 1901, the outer breakwater created a larger, deeper safe haven for ships that had outgrown the depth of the anchorage behind the original, inner breakwater.

The inner breakwater had been the first massive public works project of the new U.S. Government. Beginning in the 1820s, its construction spanned three-quarters of a century. But as it neared completion at the dawn of the twentieth century, it was already obsolete.

Two lighthouses have marked the old inner breakwater. The original Delaware Breakwater Lighthouse, near what is now the middle of the inner breakwater, is long gone. Its site is marked only by the rubble of a brick foundation. But its replacement, Delaware Breakwater East End Lighthouse, still stands. That’s the brown (or red, depending on the sun) lighthouse easily visible along the shore from Lewes to Cape Henlopen.

East End Lighthouse went into service in 1885, marking the entrance to the inner breakwater harbor and warning ships off the tip of Cape Henlopen. Over the years, it gained the reputation as “the noisiest light” on the bay because its foghorn sounded almost continually during the harsh, murky winters.

The lighthouse was given a conical-shaped fourth order Fresnel lens, surrounding an oil vapor lamp. And, although the lighthouse is no longer active, the beautiful French lens still graces the lantern room. 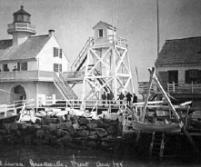 Harbor of Refuge Lighthouse and Delaware Breakwater East End Lighthouse are the first Delaware treasures visitors see when they enter the State via the Cape May-Lewes Ferry. Hundreds of thousands of ferry passengers have made the lighthouses their first photographic memories of Delaware. But the only way to see inside the lighthouses - and to view the historic lenses - is to take one of the escorted tours offered by the Delaware River and Bay Lighthouse Foundation on selected Saturdays throughout the summer.

The Foundation owns and preserves Harbor of Refuge Lighthouse. The State of Delaware owns Delaware Breakwater East End Lighthouse and leases it to the Delaware River and Bay Authority for preservation.