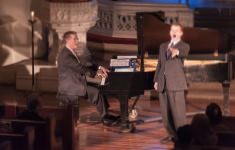 *****IMPORTANT UPDATE:  In an abundance of caution and with guidance from the CDC and State and local health departments, Coastal Concerts has decided to postpone the Andrew Garland/Warren Jones Concert scheduled for Saturday, March 14, 2020. We are sorry for this inconvenience but believe that the safety of our patrons and volunteers as well as our artists should be our top priority during this medical crisis.

We will reschedule the concert as soon as it is feasible to do so, and those holding tickets to Saturday’s concert will be able to use those tickets for the rescheduled date. Our ticketing office will notify all ticket holders as soon as a new date has been established.

We will post periodic updates about the rescheduled date on our website (www.coastalconcerts.org). In the meantime, if you have any questions please do not hesitate to contact us at 888.212.6458.

Thank you for your understanding and support.

Andrew Garland, Baritone
American baritone Andrew Garland has been saluted by The New York Times as having a “distinctly American presence” with a “big voice” who is “an able and comfortable performer, and a sincere one,” and by Opera News as having “coloratura [which] bordered on the phenomenal as he dashed through the music’s intricacies with his warm baritone, offering plenty of elegance and glamour in his smooth acting.”

Garland is best known for his highly communicative style of singing. Equally at home in opera, concert and recital, he brings to each genre a powerful voice and extremely sensitive delivery. On Mr. Garland’s presentation of Lee Hoiby’s I Was There, the composer commented: “I have performed these same songs with several professional baritones of stature, and none has brought more depth of musical understanding than did Andrew Garland. Quite apart from the special beauty of his voice is his distinctive feeling for the musical line. He pulls the listener irresistibly into the music. In my judgment, he is a rare talent, and I expect him to enjoy an important career.”

Warren Jones, Piano
WARREN JONES enjoys a notably eclectic career that has taken him to virtually every corner of the musical world.

He is a long-time member of the faculty of Manhattan School of Music as well as the Music Academy of the West, and received the “Achievement Award” for 2011 from the Music Teachers National Association of America, their highest honor. In 2010 he was selected as “Collaborative Pianist of the Year” by the publication Musical America. He has been an invited guest at the White House to perform for state dinners in honor of the leaders of Canada, Russia, and Italy; and three times the invited guest of the Justices of the United States Supreme Court for musical afternoons in the East Conference Room at the Court.