The Saltiest Town in Delaware 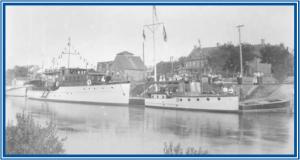 The same year that the famous English poet Thomas Dryden was born was also the year the "x" symbol was proposed for multiplication equations. The year was 1631. That same year, a small Dutch ship slipped over the horizon from the Netherlands to establish a small colony at the mouth of what they called the "Great South Bay" to begin a whaling colony and raise crops, mostly for their subsistence, on the western edge of Lewes. In the spring of 1631, they arrived, built fortifications, and were soon joined by fellow Dutchmen from New Amsterdam. Soon, the settlement would be eradicated by attacks from the Lenni Lenape, the local Native American tribe of the Delaware. The settlement lasted less than a year. 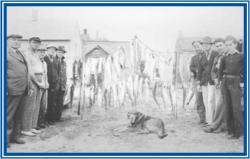 Yet far from being a curious side note in history that small settlement, named "Swanendael," would become the focal point of close to 150 years of disputes between colonial governors, settlers, and royalty and the English courts. The 32 men who died at Swanendael in 1631 set into motion the events that without a doubt established Delaware as a separate state.

In 2006, 375 years later, we celebrated that settlement and what it means not only to Lewes but to Delaware as well. We looked back on our Dutch roots and our close ties to the sea. We explored our rich past, filled with romantic images of a small town, nestled behind the sandy, protective nook of Cape Henlopen.

Perhaps there has been no better picture painted of "Old Lewes" than in Delaware: A Guide to the First State by the Federal Writer's Project back in 1938:

"Lewes (15 alt., 1,923 pop.) pronounced Lewis, at the mouth of Delaware Bay, the saltiest town in Delaware, is known to every ship captain who has ever picked up a pilot for the river, or has ever rounded Cape Henlopen in a gale to find shelter behind Delaware Breakwater. As the home of Delaware pilots for at least 280 years, Lewes ('Lewestown' to older residents) has a tradition of the sea borne by every east wind that haunts its narrow streets and aged cypress-shingled houses. Its present is saturated with the drama of its past. There is a Fountain of Youth on Pilot Town Road, a Ship Carpenter Street, a Knitting Street and a Frog Alley. Lewes has been plundered by privateers and has bargained with Captain Kidd for his loot; it has bombarded in war, and knows all about shipwreck and sunken treasure."